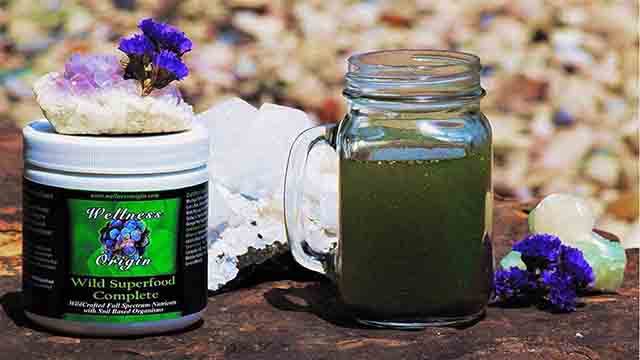 It would be a great story to tell that Wellness Origin Wild Superfood Complete was introduced as the result of marketing and determining what the public wanted in a superfood with the intent on packaging and selling it to the public. But that is not how it came to be.  The truth is the professional staff at Wellness Origin researched for an organic superfood powder to take every day so they, themselves could reap the many nutritional benefits.

These two people one of whom also holds a PhD in Biochemistry and Cellular Biology, were very forward thinking nutritional consultants and learned about superfoods over ten years ago. The early scientific nutrition research was coming in, and it validated observations they had made concerning wild sourced superfoods.

That observation was that the best superfoods were those that remained as close to the form they were produced by nature in the wild.  Their company, Wellness Origin offered Spa treatments, and state of the art health treatments including the sale of vitamins and proven supplements. But they did not originally intend to sell their personal favorite, a wild superfood powder made from the best ingredients.

Many of these ingredients such as Eleuthero Root, Peppermint, Blue-Green Algae and Nettle Seeds had been used for thousands of years and their efficacy was unquestioned. In fact, NASA experimented with blue-green algae as a possible food source for future astronauts.

Over time, clients would ask questions about superfoods and the nutritionists at Wellness Origin would have first-hand knowledge and experience because they were already taking them in a wild superfood powder and experiencing their benefits.

People would ask the nutritionists at Wellness Origin the secrets of their youthful and healthy vitality. It wasn’t long before their clients began clamoring for the organic superfood powder.

Wellness Origin Superfood Complete is the result of our clients wanting to use the very same easy-to-use, powerful combination of superfoods and antioxidants that were consumed by the professional staff Wellness Origin. It became very popular because clients knew it would be of the highest quality since it wasn’t originally created for a mass market, but solely for the benefit of the nutritionists themselves based upon their experience in nutrition science.

Wellness Origin Superfood Complete is comprised of ingredients from several different continents. No corners were cut, or compromises made in its production because if you wanted a supplement for yourself, wouldn’t you want the very best and most productive ingredients in it?

Today, many people enjoy and benefit from the original blend of highest quality, wild sourced ingredients found in Wellness Origin Superfood powder. It remains the favorite healthy food offered at their organic food store much to the delight of the two founders of Wellness Origin because it helps them achieve their goals of educating people about nutrition and ensuring they are consuming high quality and valuable superfoods.

A question we often hear is “what nutrients provide energy?”

Since the FDA began allowing the sale of medicinal herbs, a deluge of herbal and medicinal supplements has hit the consumer market. Many of these substances have been used for thousands of years and have a proven track record of results. But there is a difference in quality among supplements. Some work better than others and some may not work at all. That is why it is so important to have an advocate; someone who has knowledge and practical experience with what works well and what doesn’t.

As we become more educated about the dangers of processed food and potentially harmful additives, the understanding is that unadulterated, organic food in the form nature designed is better. With the dizzying array of organic energy supplements out there, the question becomes “which supplements are most effective for the greatest number of people?”

Sometimes, it takes science a while to catch up with what humans have already figured out. People use some organic remedies effectively for generations. A classic example is aspirin. Acetylsalicylic acid was officially synthesized in 1853 but people have been using a form of it, usually derived from chewing willow tree bark, since ancient times. The great doctor of Greece, Hippocrates, used it in 400 BC. Scientific clinical trials often take years, if not decades, to form a consensus among varying studies. This does not mean that all herbal supplements claims will eventually be validated by science, rather it demonstrates that many times, the practical experiences of people are ahead of scientific research.

Eleuthero root also known as Siberian Ginseng has been used for generations to reduce fatigue and increase physical endurance. If you ever have any doubt about its effectiveness, just look at the checkout counter of most American convenience stores. Many times, there is a stimulant section and often those over the counter stimulants contain Eleuthero root or Siberian Ginseng in a low potency or an incomplete form.  Note: Be sure not to confuse Eleuthero root with Panax Ginseng or Asian Ginseng as they are not the same.

Eleuthero root has been used for a wide variety of ailments. Currently, it is being studied for its effects on Parkinson’s disease, relief of knee osteoarthritis, breast cancer resistance and even to strengthen the immune system of AIDS patients. At Wellness Origin, our experience has demonstrated the best use of Eleuthero root is to increase alertness, energy and focus. Athletes particularly appreciate its stimulant effects.

Generally safe and well tolerated, Eleuthero root can interfere with certain medicines including blood thinners and blood pressure medicine, especially Digoxin. Many Eleuthero root products sold in the United States do not even contain Eleuthero root, so it is very important to purchase it from a reputable source like Wellness Origin. Pregnant women and people with autoimmune diseases should not take Eleuthero root without the advice of a physician.

Spirulina is green superfood that is considered one of the most nutrient dense organic compounds on Earth. It is derived from algae and is very high in protein and essential minerals. It has been studied extensively as a treatment for ailments ranging from high cholesterol to lowering the risk of stroke. Spirulina also has powerful anti-inflammatory and antioxidant properties and its usefulness as an energy aid is well established. In fact, there are so many real-world benefits to taking Spirulina that many doctors recommend taking it daily.

It is important to know the source of Spirulina because many commercially available sources are not pure and may contain harmful byproducts. Wild-crafted Spirulina is considered the fullest spectrum and most potent source.

Malic acid is an organic compound found in many types of tart fruit, especially apples. Currently, it is generating a lot of scientific interest in treating Fibromyalgia. Additionally, Malic acid recently demonstrated the ability to lower urinary ph and is being evaluated as a treatment of calcium renal stone disease (kidney stones).

A dependable remedy against fatigue, Malic acid is known to improve endurance. Another popular supplement used by athletes, it has a solid reputation for boosting performance during strenuous exercise. It is generally well tolerated and has a reliable safety profile, having been used as a tart food additive for decades. Malic acid is a skin and eye irritant and supplements can sometimes cause stomach upset which is generally relieved by drinking a cup of water.

Fulvic Acid is another organic compound with a long history of increasing energy levels. Fulvic acid is created during the breakdown of plants and the decomposition of organic matter. If you have ever hiked in the woods, odds are you were walking on nutrition-rich humus containing fulvic acid.

Fulvic acid has many other uses, including acting as a strong antioxidant and boosting the immune system, but it’s effectiveness as an energy producing supplement is well established. Fulvic acid is currently being studied as a remedy for eczema and to alleviate issues resulting from Alzheimer’s.

It is used by bodybuilders to improve energy and performance during workouts and it is believed that Fulvic acid energizes the body by increasing oxygen absorption. Although some schools of thought believe the stimulant effect is due to Fulvic acid’s ability to detoxify free radicals and carry minerals across the cell membrane.

At Wellness Origin, our supplements are designed by a team of clinical nutritional consultants lead by a PhD. We’ve spent decades advising people on nutritional choices and our formulations are the result of years of dedicated scientific research into finding the most effective and safest sources of natural nutrients. Many of these supplements are taken by our staff every day because we have so much confidence in their ability to increase health and vitality.

Let our knowledgeable staff help you find the supplements that fit your health needs and lifestyle.